The third World Meeting of Popular Movements concluded with a dialogue between popular movements and Pope Francis in the room Paolo VI of the Vatican.

The last day of the event was in the city of Vatican. This morning, the delegates of popular movements participated of the Eucharist in the Basilic of San Pedro, presided by Cardenal Turkson. They delivered their offerings, presents made by all the popular movements, showing their effort and their different realities.

Later, about three thousand people reunited in room Paolo VI for another important moment sharing this meeting with Holy Father.

Cardinal Turkson welcomed everyone in the room and presented all the work made in this third WMPM: It was projected a recompilation video of these four days of event. Then two referents of the popular movements introduced the seven main points of the “Transformative Action proposals” approved in this third Meeting.

Pope Francis sent a message of hope, delation and love:

“I know you dedicated a day to discuss the drama of migrants, refugees and displaced. What to do about this tragedy? In the new Dicasterio (for Human Integral Development) that’s in charge of Cardinal Turkson, there’s a department that works for these situations. I decided that at least for a while, this department is going to depend directly of the Pontific. Because here we have an opprobrium situation that I can only describe with one word that came up spontaneously in Lampedusa: Shame”.

A person displaced by the tyranny of money

“What is happening in the world today that when there’s a bankruptcy quickly appears the enough amount of money to save it, but when there’s a bankruptcy of humanity there isn’t not at least the very money to help those brothers that suffer so much? Therefore Mediterranean has become a cemetery, and not only Mediterranean… there are a lot of cemeteries near walls, walls spiked with innocent blood. During these days of meeting, you’ve say it in the video… How many died in Mediterranean?”.

“Set an example and demand is a way to introduce ourselves in politics, this takes me to the second subject that you discussed in your Meeting: the relation between People and Democracy. A relation that has to be natural and fluid but that is in danger of disappearing. The gap between population and our current ways of democracy is getting bigger and bigger as a consequence of the huge power of economic and media groups that dominate them. The popular movements, I know, are not politic parties and let me tell you that it is, in a way, because of its wealth, because they express a different, dynamic and vital way of social participation in public life”.

You all, the organization of the excluded and so much more organizations of other society sections, are called to refund democracies that are going through a real crisis. Do not fal in the temptation of the corset that reduce your only to the secondary actors, or even worst, only to the administrators of current misery”.

Humility, service, solidarity, the way of living… the value of the example

To anyone who has too much attachment for material things or for the mirror, whom likes the money, exuberant banquets, sumptuous mansions, Refined suits, luxury cars, I would advise you to notice what is going on in your heart and pray that God will release you from those bindings. But quoting the Latin American ex-president that’s here with us (in reference to Pepe Mujica), whom has affection to those things, please, don’t involve in politics, social organization or a popular movement, because is going to hurt himself, his neighbor, and is going to stain this noble cause. Also do not involve in the seminary”.

Against temptation to corruption, there’s no better antidote than austerity; that moral and personal austerity. And practicing this austerity is, also, set as an example. I ask you to not sub estimate the value of example because it has more strength that a thousand words, a thousand voters, a thousand likes, a thousand retweets, and a thousand vides on youtube. The example of an austerity life in service of the others is the better way to promote common good and the project of the tres T. I ask to the leaders that do not stop practicing this moral and personal austerity, and I ask you all to demand leaders this austerity, which is also going to make you happy”.

“To conclude, I would like to ask you to keep facing the fear with a life of service, solidarity and humility en favor to people, and especially for those who suffer. You are going to make mistakes a lot, everyone make mistakes, but if we persevere on this way, sooner or later we’re going to see the produce. And I insist, the best antidote against terror is love. 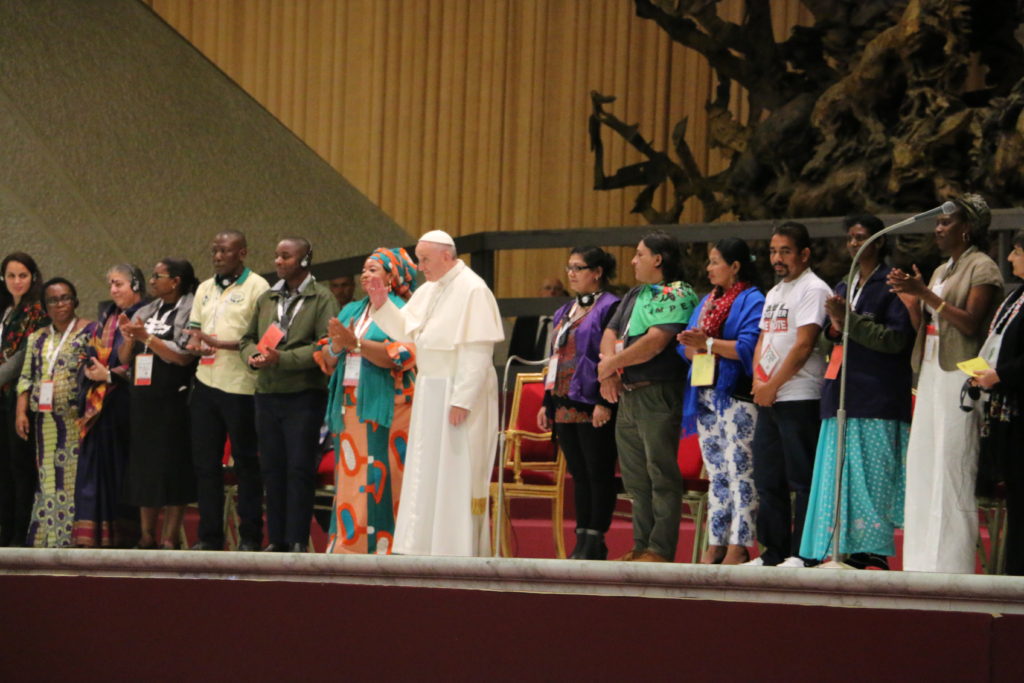